I've Fallen for a Cat 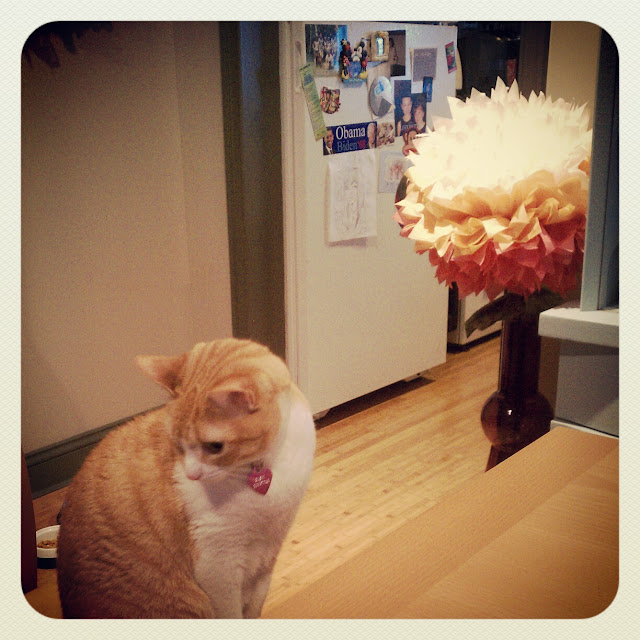 I've been a dog girl all my life.  From the day I was born, we always had at least one dog in the house.  I know dogs, I understand dogs, I love dogs.  Cats, on the other hand, were a foreign species to me.  I never quite trusted them.  I couldn't read their body language, could never quite figure out what the hell
they were meowing for.  I just didn't get them.


And then I met Foos.

Foos was my ex-boyfriend's roommate's cat.  He was fat, had one green eye and one blue eye, and would lick you on the nose if you put your face close enough to his.  I loved all these qualities about him, but he didn't really like to cuddle, which really bothered me.  He had that independent streak cats are known for, that I just don't understand.  If I were a cuddly kitty, all I'd want is to be pet and loved, just like a puppy would.  Foos was fine just sitting on the arm of the sofa, silently judging you from afar.

And now I temporarily live with a cat, Punch, who is Mark's family cat.  He loves to be pet, but only on his back and under his chin.  Try to rub his belly and you'll feel the wrath of his razor-sharp claws.  Punch lives mostly outdoors, even in the winter, so I guess we"re supposed to feel pretty lucky when he decides to meow at the back door and grace us with his feline prescence.  We really only see him when he meows at the back door to be let in.  He'll eat a few bites out of his cat dish and then meow again to be let back out.  I guess he prefers the mean suburban streets to the plush home life.

Now let's talk about this cat who stole my heart.  Her name is Sushi and she belongs to our friends Mark and Stephanie, who we are house/cat-sitting for at the moment.  She is sweet, barely leaves your side (she even waits outside the shower for you), loves attention, lets you pet her anywhere, and really only meows when she's hungry.  I've only ever seen her claws when she's licking her paws, which is adorable to watch, by the way.  She has the most perfect pink nose, the cleanest white fur on her chest and feet, and the biggest, sparkliest green eyes I've ever seen on an animal.  Right now she is curled up on my lap, purring away, and I'm not even petting her.  Amazing!

I can't believe I'm about to admit this, because it goes against what I've been saying my whole life:  I just might be a cat person.  Or maybe I'm just a this cat person.  In any case, if I can ever find another cat as perfect as Sushi, I'll have to rethink my "Dogs Only" rule.
Posted by adelineflutterby at 9:53 AM